From the summit the via ferrata offers stunning 360 degree panoramic views. The short but very steep and exposed ascent on the north face is largely via ladders (via ferrata ladders). This short stretch is a good trial stretch to discover if you can master the difficulties (difficulty to D) on the further stages. Descent via the eastern crest is easier and graded difficulty A,B.

Varied via ferrata with access through a WW1 tunnel (head torch required!). This is the most frequented tour in the region and so “congestion” can occur, especially in August. Earlier in the season there is still some remaining ice in the tunnels and in the snowfields before Forcella del Camoscio. The crux is at the steep climb just after Forcella del Camoscio and is graded difficulty C. On the upside, you will be rewarded on Monte Paterno with direct views of the north faces of the Three Peaks.

From the col of Monte Paterno you return via Forcella del Camoscio via the same path. In the steep section there are several possible descents to prevent congestion, but no-one bothers to observe those! Well secured via ferrata sections alternate with exposed passages.  During ascent and descent oncoming hikers must be expected every now and then.

Behind the hut starts the ascent to Torre di Toblin marked in red. It is recommended to use the demanding via ferrata ladders on the north face and to descend via the north-eastern flank (Ferrata Feldkurat Hosp) The quickest way to reach the access to the via ferrata ladders is to cross south at Torre di Toblin.  At the access there is a cross from which you cross the ledges into the north face. The short but extremely steep path is completely secured with steel rope and ladders. The distances between the anchors are gentle on the nerves and modern. From the summit the descent is via the north-eastern flank (Ferrata Feldkurat Hosp). This via ferrata with maximum difficulty B is also very modern with short distances. Of course you can also use this path for your climb - 1.5 hrs.

Past the Rifugio Antonio Locatelli the hike continues towards the well-known Salsiccia and on short stretches through rock tunnels and to the entrance of the Monte Paterno tunnel. (Don’t forget your head torch!). The path is defined and orientation is easy. In early summer you often come across fields of remaining snow just before Forcella del Camoscio, requiring you to carry light crampons. From Forcella del Camoscio you reach the crux, a short steep climb with difficulty C. There are two routes, whereby the left variant is intended for the ascent, the right for the descent.

The rest of the route to the summit of Monte Paterno is easy. The descent to Forcella del Camoscio is via the same route! 2 hrs.

Follow the path from the Forcella del Camoscio in an easterly direction. Well secured via ferrata sections alternate with exposed passages. It is always possible to meet oncoming hikers as the tour can also be started from Rifugio Pian di Cengia.  A grassy slope takes us down to Forcella del Lago (2552m). From there the path takes us south past the ridge to the forestry path 104, from where it is another 10 minutes to Rifugio Pian di Cengia. - 3hrs.

Certified via ferrata set an helmet, alpine boots and gloves (for via ferratas).

Basic Equipment for Via Ferratas

Technical Equipment for Via Ferratas

Travel Guide: Via ferratas in the Dolomites 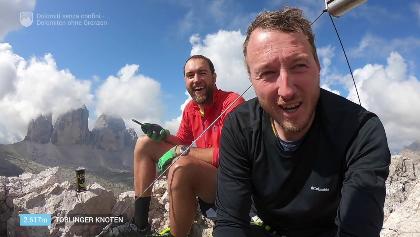