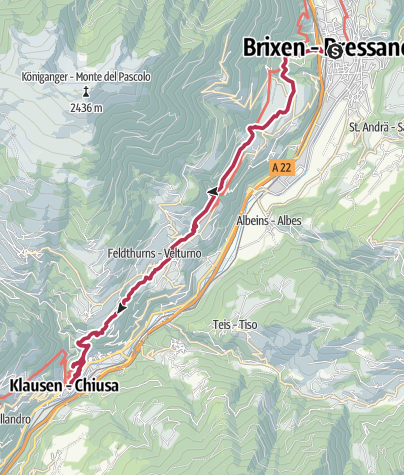 This section of the Keschtnweg leads from Brixen/Bressanone through noble chestnut groves to the artist’s town of Klausen/Chiusa. Marvel at the stunning views from the scenic path and the characteristic cultural landscape of the Eisacktal Valley.

The hike along the Keschtnweg starts opposite the Forum Brixen (car park). Follow the St. Cyrillusweg Trail along route E10 and trail no. 8 over the Burgfriedengasse lane beneath the motorway to the South Tyrolean Children's Village (Südtiroler Kinderdorf). Cross over the Talhofer ditch and turn right onto the tar road at the bridge, following the Europa-Besinnungsweg meditation path to St. Cyrillus Church. Continue along the Keschtnweg as it leads to Breitwieser-Hof farm and over a field path down to the Zimmermann-Hof farm before the tar road and ascend to the village of Pinzagen. Head south along the flat meadow path to the Rittner Höfe farms and the Sader-Hof farm (rest stop) as far as Tötschling. Bear right and cross through the pine forest to the Wöhrmann-Hof farm (rest stop). The Keschtnweg leads through the fields across mostly flat paths to Ziernfelder Hof farm and down the Schnauderer Straße street to Feldthurns/Velturno.

Follow the route through the centre of Feldthurns to Pedratz. At the Radoar-Hof farm (rest stop), take the dirt track up a short steep climb on to a wide farm road, which leads through an enchanting chestnut grove (the Keschtnloach in German) to the Weinbrenner-Hof farm. The trail continues for about 30 min to Moar zu Viersch, a picturesque farmstead looking out on the majestic peaks of the Geisler mountains.

Across the chestnut groves and through the orchards, the trail comes to the settlement of Pardell, where you pass the Huberhof farm (rest stop) looking out on the Säben Abbey and over the lower Eisacktal Valley. The short, steep path leads up to the imposing Benedictine monastery complex Säben, with its churches and chapels.

The descent is along a paved road to the medieval town of Klausen/Chiusa, a long-standing destination for travellers, pilgrims and famous artists.

Return to Bressanone/Brixen by train or city bus. 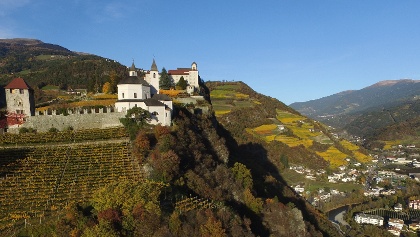 The Most Beautiful hikes in the Eisacktal
Italy › South Tyrol › Feldthurns