The Karwendel region in Tyrol and Bavaria captivates with its flowering mountain meadows and rugged peaks, rushing mountain streams and fresh mountain air. In the past, Romans, merchants and pilgrims came to the region, but today it is mainly hikers, cyclists and families who enjoy the beautiful landscape. From its source in the Karwendel Mountains, the turquoise Isar River meanders through a sunny high valley to Bavaria. Numerous lakes offer an ideal excursion destination in hot temperatures.
Read on
Outdooractive Editors  Verified partner
Author of this page

Activities in the Karwendel region 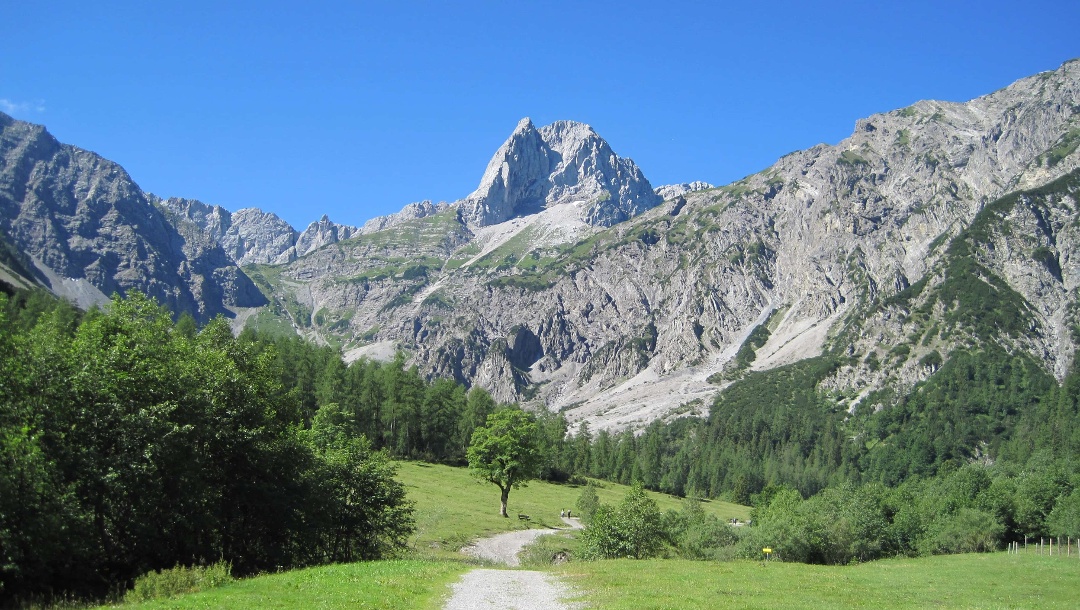 Attractions in the Karwendel region

Location and extent of the Karwendel

Most of the Karwendel is located on Austrian territory in Tyrol, but part of the mountain range also extends into the German state of Bavaria. Divided into four large mountain ranges leading from west to east, numerous side chains and a vast promontory in the north, the Karwendel is a mountain group of the Northern Limestone Alps. Over 45 km long and 30 km wide, the mountain range has 125 peaks of two thousand meters, of which the Birkkarspitze is the highest at 2749 m. The Karwendel is surrounded by the villages of Seefeld in Tyrol and Mittenwald in the west, Pertisau in the east and Innsbruck in the south, while Hinterriß is the only permanent settlement within the mountains.
The Gamsjoch group from the Sonnjoch west flank, on the left the Laliderer Wand with Kaltwasserkarspitze and Birkkarspitze, on the right the Falken Group
Photo: Tirolerbergwelten, CC BY-SA, Wikimedia Commons

The Karwendel Nature Park is the largest nature park in Austria and consists of three nature reserves, two rest areas and six landscape protection areas. Directly adjacent to it, the protection of the Karwendelgebirge nature is continued by the German Karwendel nature reserve and Karwendel foothills. As one of the last large areas in the Alps not yet completely covered by lifts, there is still a lot of wild nature to be found here. In the mountain center, there is little civilization, so the forest and the Isar river still develop naturally here. A special feature of the Karwendel is the large population of golden eagles. When visiting the nature reserves, you should pay attention to the prohibitions in force.
The Vorkarwendel from the Seebergspitze
Photo: Tirolerbergwelten, CC BY-SA, Wikimedia Commons

Hiking in the Karwendel

Hikers and mountaineers love to come to the Karwendel. While there are no gondolas and lifts in the interior of the mountains, there are some on the edges, which are uphill from the villages. There are 25 serviced huts in the Karwendel, as well as self-catering huts and bivouac boxes. Those who take a longer tour, such as the Red Route of the Via Alpina or the Munich-Venice Dream Trail, can stay overnight in these when crossing the mountains. Popular shorter routes lead to the Mittenwalder Hütte, over the Sulzeklamm suspension bridge to the Brunnsteinhütte or to the top station of the Karwendel cable car.

Challenging hikes in the Karwendel mountains

Mountain climbers venture farther into the mountains. While only a few peaks of the two mighty central mountain ranges are accessible by good pathways, most other peaks can be reached from the south without major climbing difficulties. However, the climbs through craggy, mountain pine or scree fields are sometimes pathless and the rock is often fragile. The Karwendel Altitude Trail is ideal for those looking for adventure.

Nature excursion destinations in the Karwendel

Beautiful excursion destinations include the Gleirschklamm Gorge (with an untamed wild river), the Hafelekar (the window into the Karwendel) and the Halltal Valley as a valley with history and wildly romantic nature. Routes to the Hochplatte, a gentle peak with flowering meadow slopes above Lake Achensee, to the source of the Isar or to the Mondscheinspitze, the residential area of the ibex, are also worthwhile. Through the Wolfsklamm Gorge and dense forest, you reach a pilgrimage church enthroned on rocks and the Lalidererwände are probably the most famous northern walls of the Limestone Alps, whose colossal grey rock faces tower above the green alpine meadows.

Show all webcams in the Karwendel region

Destinations in the Karwendel region